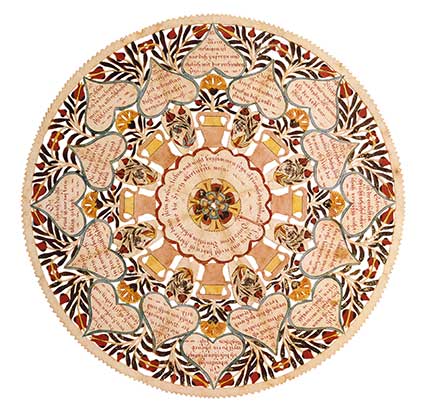 Johann Christian Strenge, the only son of Johann Henrich Strenge and his wife, Maria Catharina Romer, was born on October 24, 1757, in the Hessian village of Altenhasungen. He was baptized there a few days later with Christian Ruhling as his godfather, and he was also confirmed there, in 1772, in the Reformed church. Strenge enlisted in 1776 in the Fifth Company of the Grenadier Regiment led by Colonel Johann Gottlieb von Rall, and the unit landed in New York in August 1776. When Washington crossed the Delaware, Strenge was captured but presently released to the British. Subsequently the unit was in Georgia, but when it returned to Hesse-Cassel in 1783, Strenge was recorded as “on leave.”[1] In fact he had deserted, and within a few years he was located in Hempfield Township, Lancaster County, beginning a career as schoolmaster, scrivener, justice, and property owner. He married twice and left a family, for some of whom he made pieces of fraktur, some of which have survived.

Although many of Strenge’s students were Mennonites, he was not. He created bookplates, Vorschriften, Taufscheine, Liebesbriefe, presentation frakturs, music book title pages, and even a crucifixion scene. He taught at least one school term in Chester County, and he undoubtedly knew and influenced—or was influenced by—Christian Alsdorff, who in turn was artistically related to the Eyers.